This week only saw one League game, so this is going to be a shorter update.  My current preoccupation is a pairing of Magnus the Warlord (Magnus II) and General Ossrum.  The challenge game was one with another player who’s just getting his feet under him in Retribution and who wanted to play Adeptis Rahn.  That would be a game for Ossrum in that pair – unsurprisingly a durable list of sturdy models with Orin to babysit a reasonably durable Warcaster tends to be a tough game for Rahn – but I also didn’t want to provide such a potentially negative first impression of one of my own favorite warcasters to another player – so I instead offered to amend my pair to include Damiano to make things a little more interesting.  We rolled up Mirage as our scenario for the game and – having won the roll off – I decided to choose my table edge and go second in order to have a wall and trench to keep Damiano as safe as I could.  Even the combination of cover and Orin isn’t an airtight defense against Rahn, but it’s something. 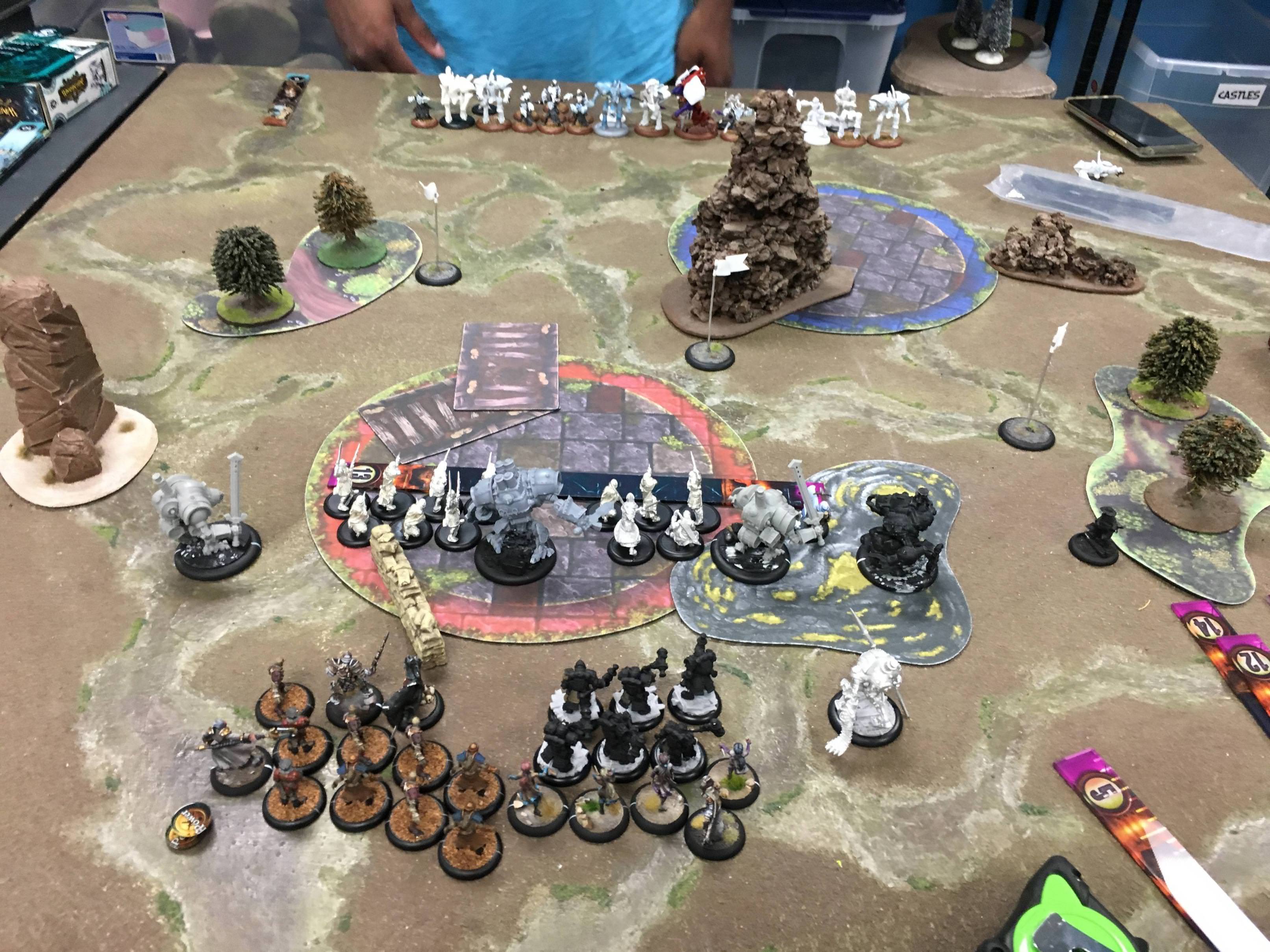 My opponent kept pretty even in his deployment – Rahn and Disco kept fairly central with the lights fanning out to both sides and one unit of battle mages to more or less lined up with each zone.  On his first turn things ran, Rahn included – he used his theme benefit to start with Polarity Field on the Preyed unit of Mages.  For my part my Skirmishers were angled slightly to the left to focus on one of the two battle mage units and to start getting into and through a forest just on his side of the board.  Damiano aimed to first move up behind the wall, and then possibly further into the trench, following up behind the Eliminator units – which were also headed that way.  Orin tailed him and Kell headed off to hang out in a forest by my nearside flag – not quite on it unfortunately.  Damiano put up Death March on the Skirmishers – who were going to ground anyway and who I didn’t mind losing some of if Rahn wanted to feat largely for that purpose – and Road to War on himself.  Alexia made a Thrall and moved up to be able to catch most of the Idrians while Kell walked into the woods and shot one of the battle mages in the right side unit.  The heavies moved up behind the Idrians to make drags harder to arrange even with Rahn’s feat and Eiryss moved up to be within walk range of the central flag. 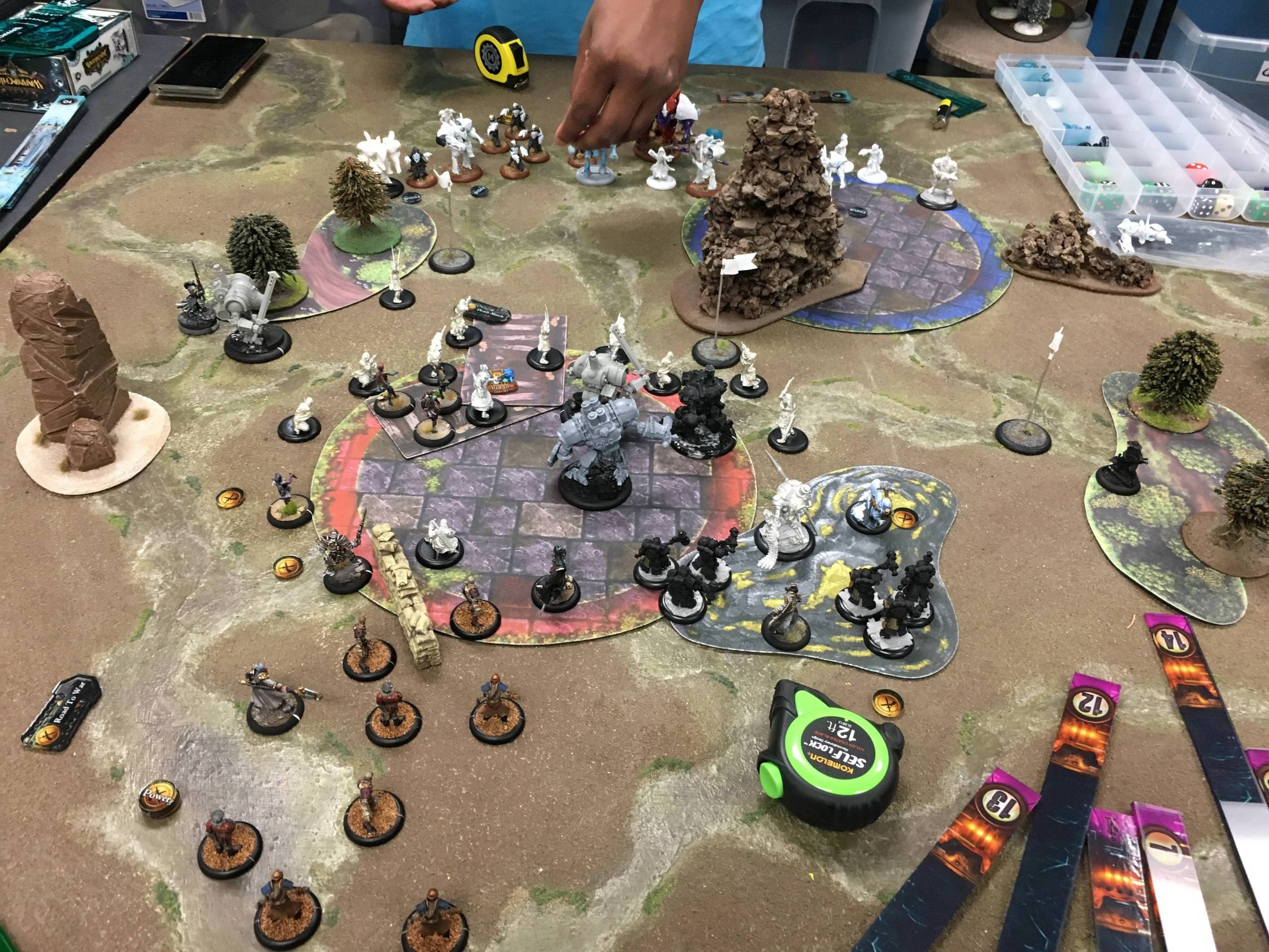 The selection of mediocre targets I’d offered weren’t sufficiently tempting to induce Rahn to feat, so instead his force went about setting up for scenario play and killing a few (four I think) Idrians, which was more than I’d expected without help of the feat.  His Griffon charged in to start trying to establish a presence around the central flag and most of the other attacks on the turn came from the Magisters and the Mages on the left, who sort of hid behind a couple of the light warjacks in the area and threw out force bolts.  The turn before Rahn was likely to feat seemed like a fine time for me to use mine – both for the durability and because Conquest has text beyond +3/+3 strength and armor that is about as useful against Rahn as it’ll ever be.  Because Damiano was going to want to move up into the trench to help extend the feat’s area of effect and I also wanted to put out Deadeye on the Idrians he upkept Road to War and kept five focus.  Anastasia ambushed in to be able to charge into the woods and into a light from within the feat area and Alexia put out a couple of Risen – one in position to turn into another Thrall and put in another effective damage roll.  Kell aimed and took out two more Battle mages, while Eiryss moved up and took out another with a Phantom Seeker shot.  One of the two Eliminator units then charged in (well one did – one was out of range) on a Gorgon on the left side, to provide Damiano space in the trench to advance into.  He did, and then feated and cast Deadeye before missing a handcannon shot.  The Idrians then advanced and proceeded to kill one model in their Prey’ed unit, which was certainly on the low end of their spectrum of output for the turn.  They then got out of the way.  The Buccaneer then boosted and hit the Griffon with its net, which was shield guarded over to a Chimera behind it.  The second Eliminator unit combined with the newly minted Thrall to take out the Griffon and Anastasia and a Nomad did the rest of the damage to the Gorgon in the forest.  The Freebooter, using Jury Rigged and with a Road to War move thrown in, then walked over to the downed Chimera and killed it with two initials – I had hoped it would survive to be thrown into some of the Battle Mages that were more alive than I’d expected by this point in the turn.  Orin joined Damiano in the trench and I finished the turn with two flags and my own zone under control, going up 3-0. 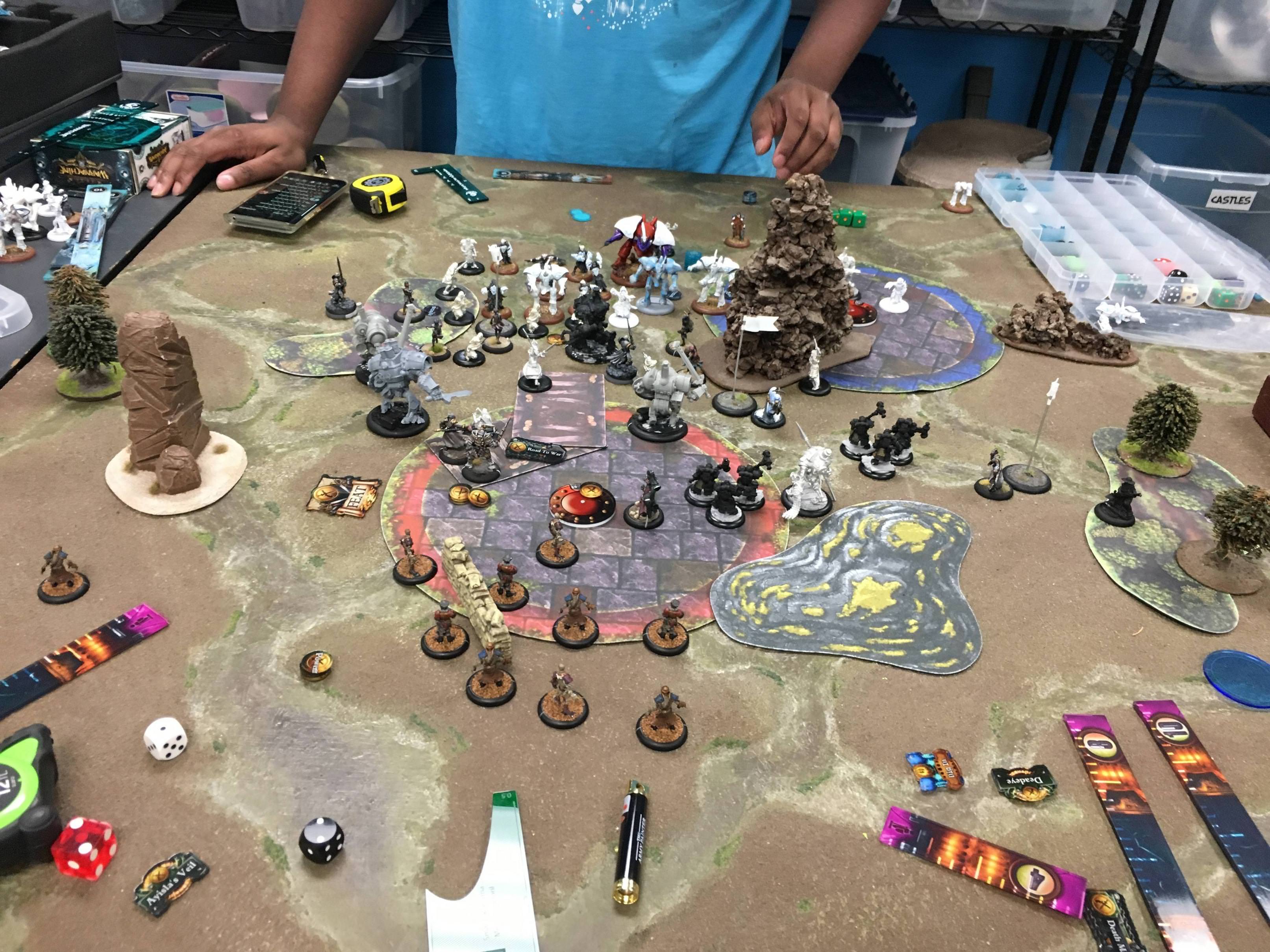 With a fair amount of ground to make up on scenario and an effectively sturdy and ARM-buffed army to take it from Rahn had a tough task ahead of him.  The best thing to do with the turn seemed to be to take advantage of some model clumps I’d left to set up slams on his own models with Force Hammer and to otherwise grind down some of the infantry that had pushed up into his lines.  That generally went off – the Aspis punched down an Eliminator before Rahn feated and slammed it over another as well as an Idrian and a Thrall.  The Battle mages on the left largely cleaned up the remaining Idrians as well as another Eliminator and Anastasia.  A Magister took Eiryss off of the central flag and the remaining Battle Mages on the right removed my contesting Idrian from his zone and Ragman from my close flag.  none of the flags were really available to score, however, as there was at least one heavy within 4″ of both of those closer to his side of the board and Kell prowling in the forest and a couple of ARM 21 Forge Guard were hard targets to make much headway against if he had aims at my flag (he likely didn’t have a solo close enough to get there either).  As a result at the end of his turn he scored his own zone, and I mine, but that left my route to a scenario win fairly clear at 4-1.

Because I am sort of stupid I spent a moment before my third turn started trying to figure out some way to kill to lights within shield guard range of a third light so that Damiano could shoot it with a Blaster shot to kill a Magister and two mage grunts – for really no particular reason – none of these models were scenario relevant, but now that I’ve whetted by Blaster appetite I almost can’t help myself.  The relevant activations on the turn involved the Forge Guard charging in to kill a Battle Mage who was contesting the right side flag and Kell then walking onto it.  I otherwise took an activation to do with the Freebooter what I hadn’t managed the turn previous – hit the Aspis with my initials and then threw it onto a Magister and two two Battle Mages largely to be able to point out to my opponent that the threat of slams and throws provided a reason to be mindful of clumping them up even though Force Barrier seemed to protect them from AOE based threats.  I finished the turn with control of the right flag and my own zone to win 6-1. 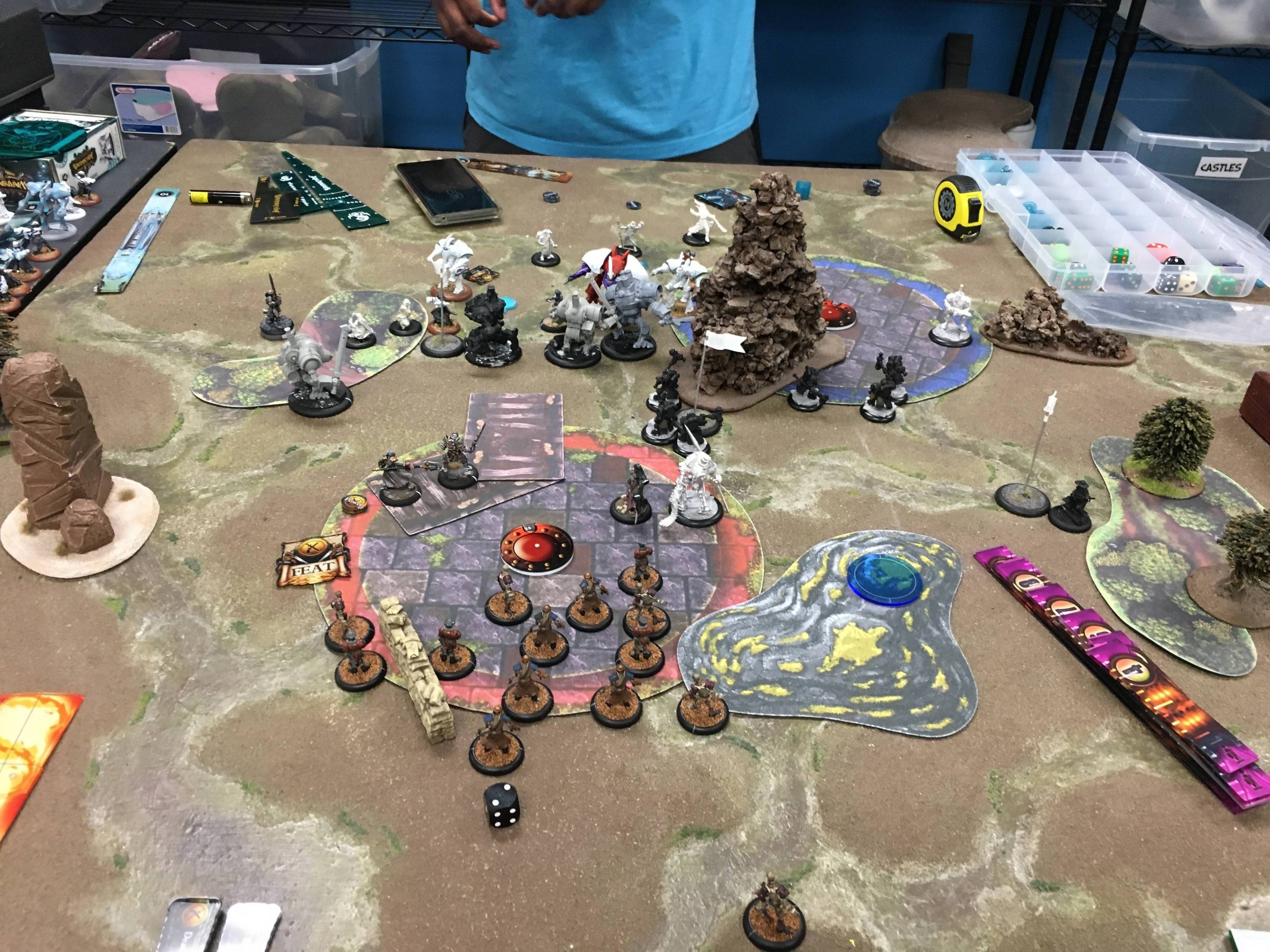 I’d like to thank my opponent for the game and anyone who’s made it here for reading.  I don’t think I’ll have any more coin league games for the week, but I’m aiming to put together an article about luck in the game and particularly how to put oneself in position to, well, get lucky.

iThere are no comments

Friends of the Blog

Begin typing your search above and press return to search. Press Esc to cancel.