This past weekend I attended a 20 person local steamroller and brought the familiar pair of Ossrum and Thexus, lists as follows:

The questions that I was particularly interested in answering throughout the event were:

My opponent, a local, and I were a little miffed that we were matched up immediately (but of course you always are) and I was also a little miffed to have to play Nemo III on a fairly slow scenario.  On the top of turn one I ran, aiming to keep my options open if only I could get away with taking a solid shot at Nemo right away and duck having to have a real plan for the game.  This involved keeping lines of threat as open for both of the Gunners as possible around a central obstruction and being sure that Eiryss and the Artillery could manage to clear the same for LOS (but without making a show of measuring from either too much).  The former got Snipe and the latter Fire for Effect.  On the bottom of one Nemo didn’t quite play things safely enough.  He didn’t advance aggressively, but didn’t have to, really, and really I was happy to take what I could get.  Nemo ended the turn having put Electrify somewhere (not on himself, which was really what mattered) and Lightning Shroud somewhere else (not on himself either, but in this case it didn’t matter) and then on the top of two I threw a lot of dice at him.  Eiryss got the show started by seeing if I could roll a 5 and then, having proven that I could, I figured that I was feating this turn regardless of what happened vis a vis killing an elderly inventor, and so I did (but didn’t do damage).  I ran the Basher up into a trench to engage a Firefly near one Strider, to try to encourage poor scenario play as much as I could, but I then managed to avoid coming up with any more ideas because the Artillery and a Gunner killed him. 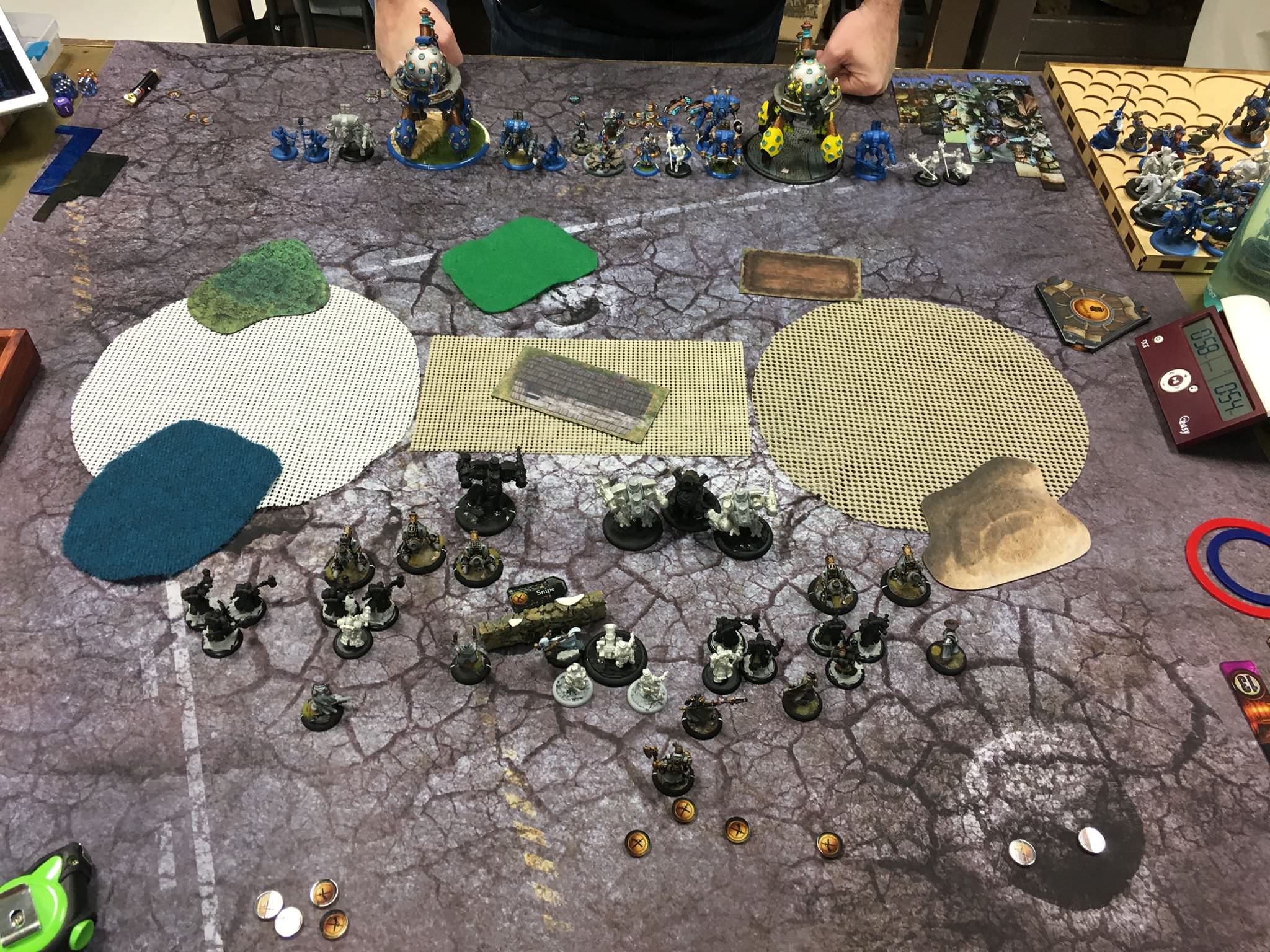 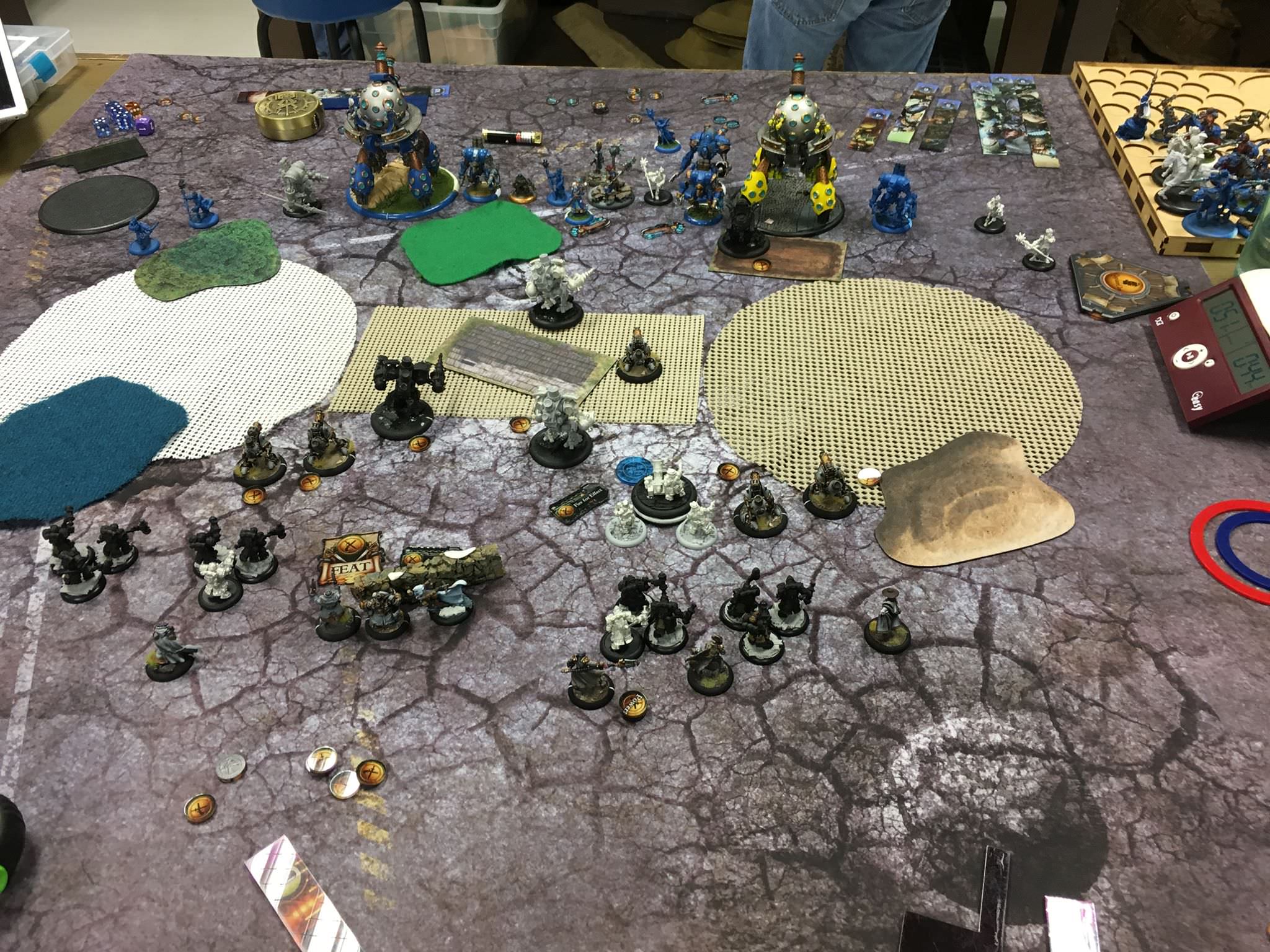 This looked like a job for Thexus to me, as I have generally been rewarded for trusting his ability to trade well with Cryx heavies, and it was Cryx heavies on the other side regardless of the list my opponent took (the other was also in BI – a Venethrax list).  This was also a good chance to test the premise that Croes are actually a live unit even against fairly shooting resilient lists that Ossrum might draw out (BI certainly being one, Forges another) because those lists don’t necessarily have the same durability in melee and Thexus facilitates their backstab charges as well as their backstab shooting.

After I moved up on the top of one my opponent responded by moving fairly aggressively and particularly by getting the DJ up behind a central obstruction with Spectral Steel on the bottom of one and trying to keep as safe from my Machine Wraiths as possible (mine were certainly the better Wraiths in the matchup).  I was reasonably sure that I had a decent long game, but also that the game would be pretty short if the Deathjack (or possibly any Cryx heavy) ever got to Thexus, so I spent a bit of time early making sure that I wasn’t within 16″ if I could possibly help it.  On the top of two I accepted that I would have to get within the magic distance if I wanted to have a decent feat, which I did, pulling the Reaper towards the ambushing slavers on the right, the Deathjack towards the Machine Wraith that hopefully spelled its end and TKing the Inflictor on the left side around to set up a Croe unit charge.  Everything went relatively well except in re: the Deathjack, which I failed to roll a five to hit.  I contented myself by trying to jam it up behind the central obstruction as thoroughly as I could, charging in a Warden and beating it back diagonally towards the Cryx deployment zone. The turn was otherwise relatively uneventful, though I managed to kill a Siren but not a Machine Wraith with the one Overlord in range on my right.  On the bottom of two the Deathjack and Seether certainly killed the sacrificial Warden very thoroughly, but otherwise things went fairly well, but he scored a point on his close zone and kept the others contested.  On the top of three I took down the Seether that had been playing patsy to the Deathjack and did a moderate amount of damage to it as well via Adrenal Flooded drudges.  At some point either during this turn or the turn previous I also brought down the two Scavengers.  I scored both my near zone and the right circular zone on the turn to go up 2-1.  On the bottom of three the Deathjack removed my Wrecker, and Malice continued to mostly soak up attacks and hoard souls, slowly fighting the Bender unit on the left but being ARM 22 and in a zone more than anything else.  He scored his near zone one again on this turn, 2-2.  On top of four the combination of a boosted hex blast and three AF drudges finished off the Deathjack, though after Aiyana whiffed her Harm roll.  My volume of attack advantage ground him down to Malice, his Deathripper (scuffed), Darryl and Mortenabra by the end of the turn, and I scored 2 to go up 4-2 (Thexus wasn’t quite ready to get into my friendly zone and my Monstrosities were now gone).  On bottom of four, without a much else to do, Morty went in herself and started collecting souls,  and Malice killed the remaining Warden, but I scored again at the end of the turn, 5-2.  That allowed me to walk Thexus into my near zone and end the turn on top of five to go up to 7-2 and win on scenario. 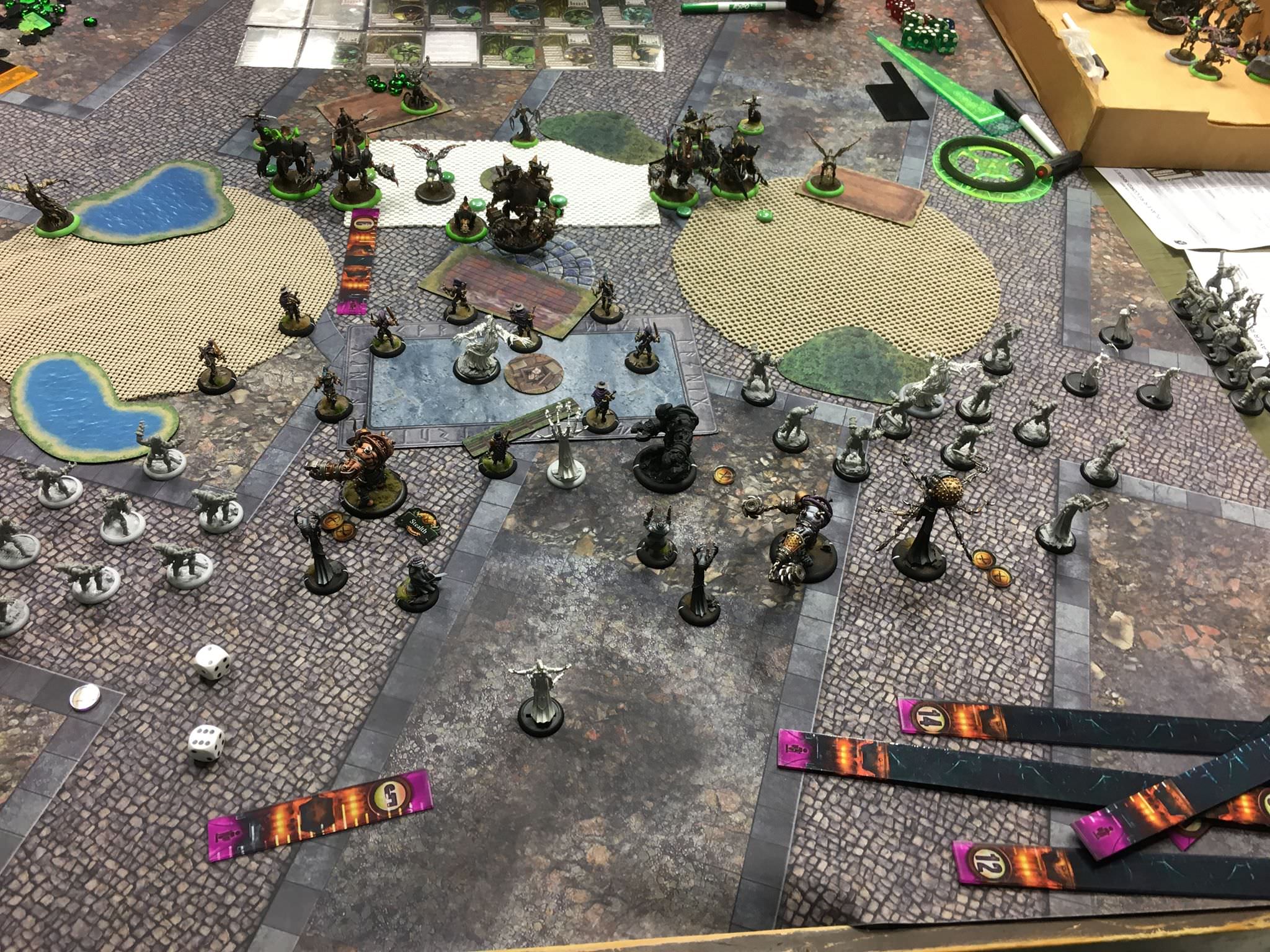 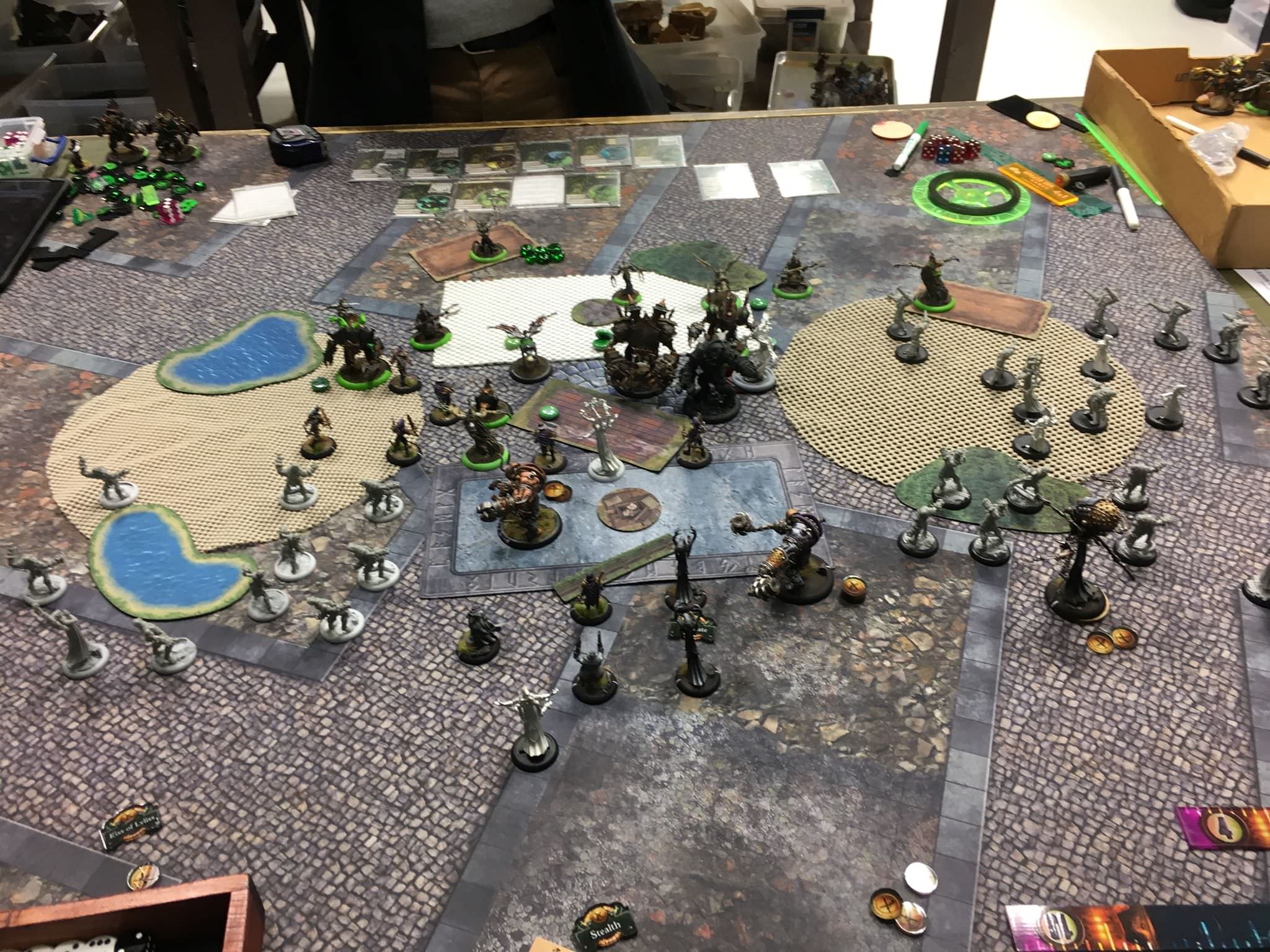 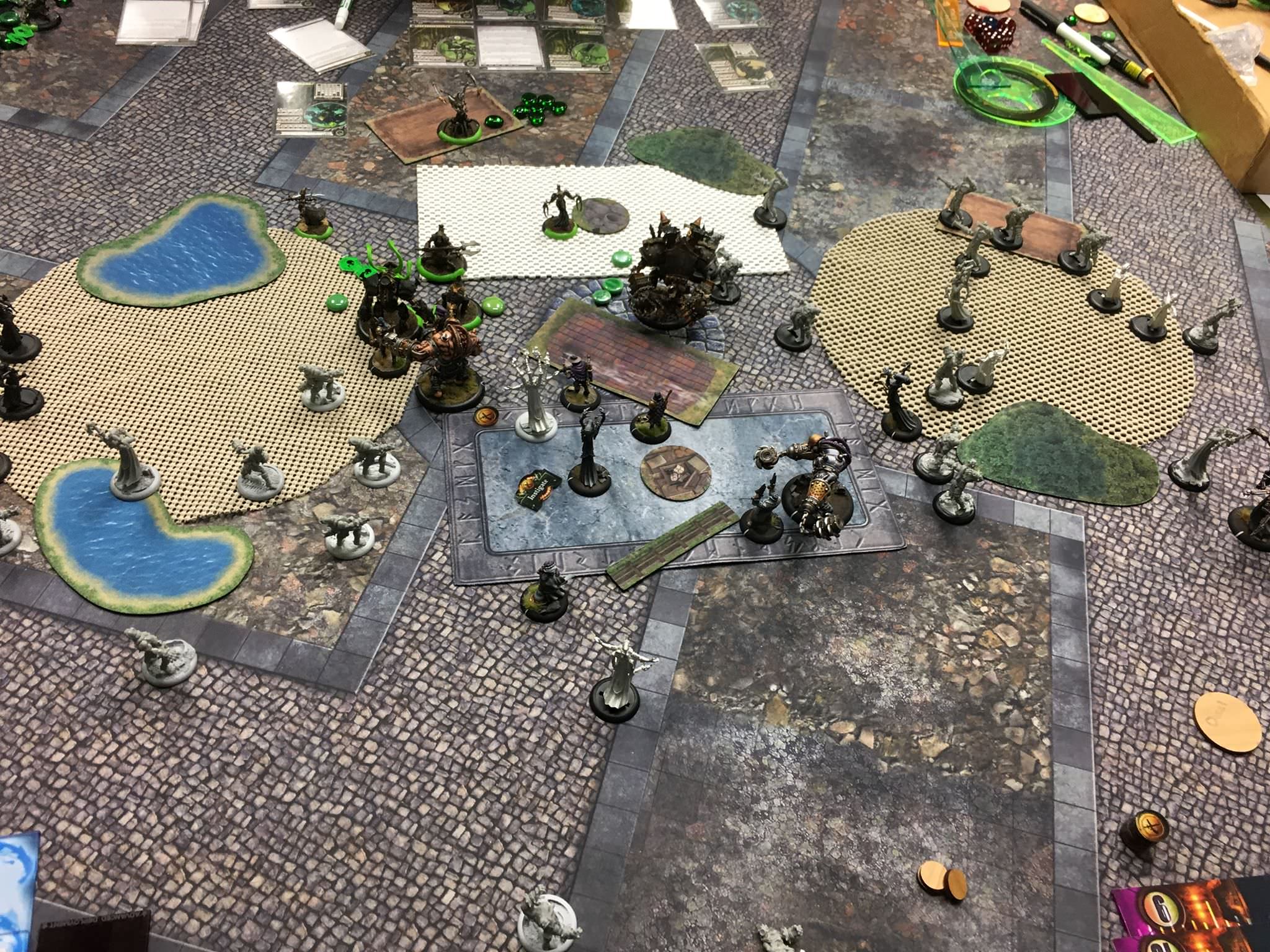 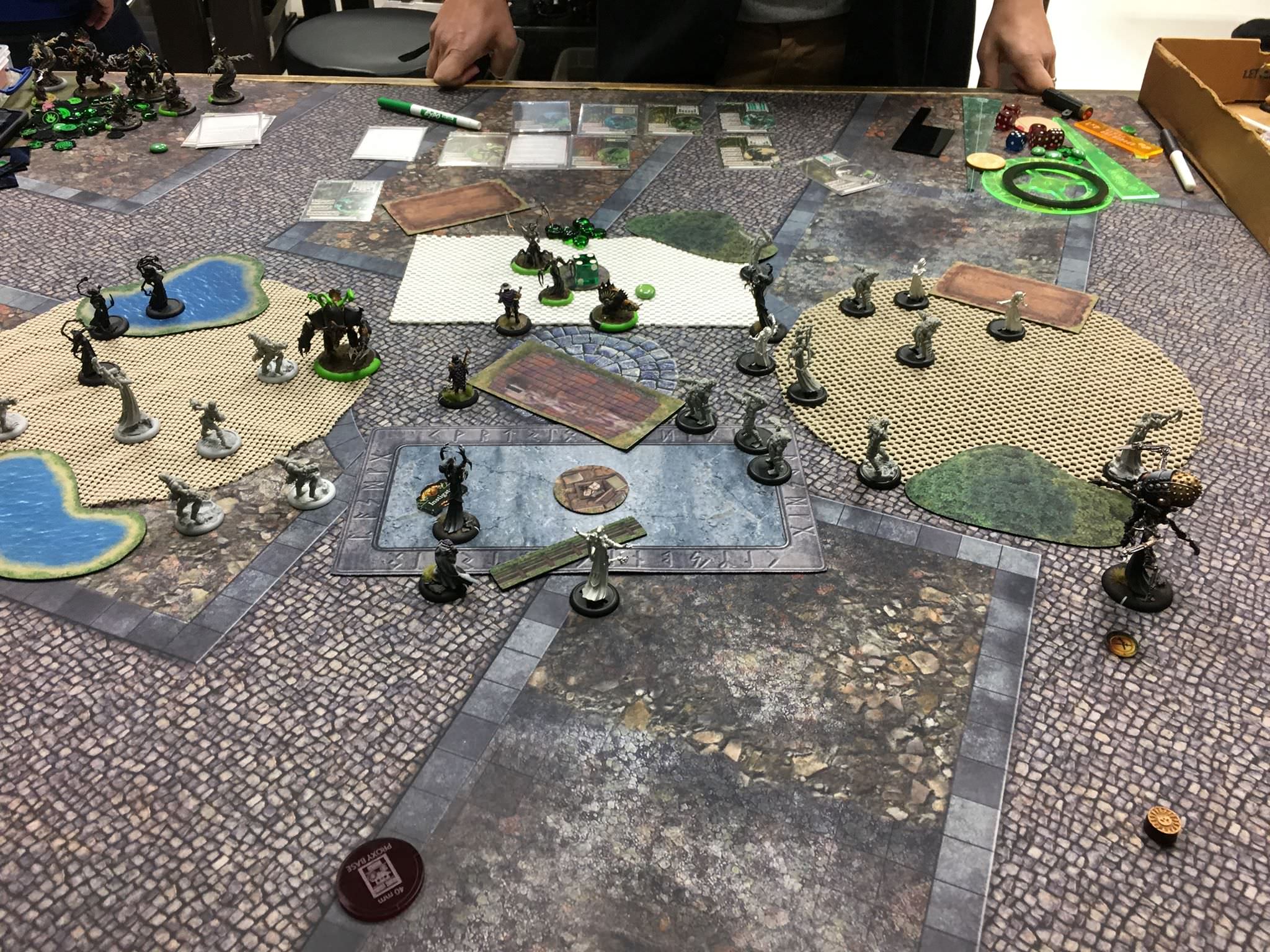 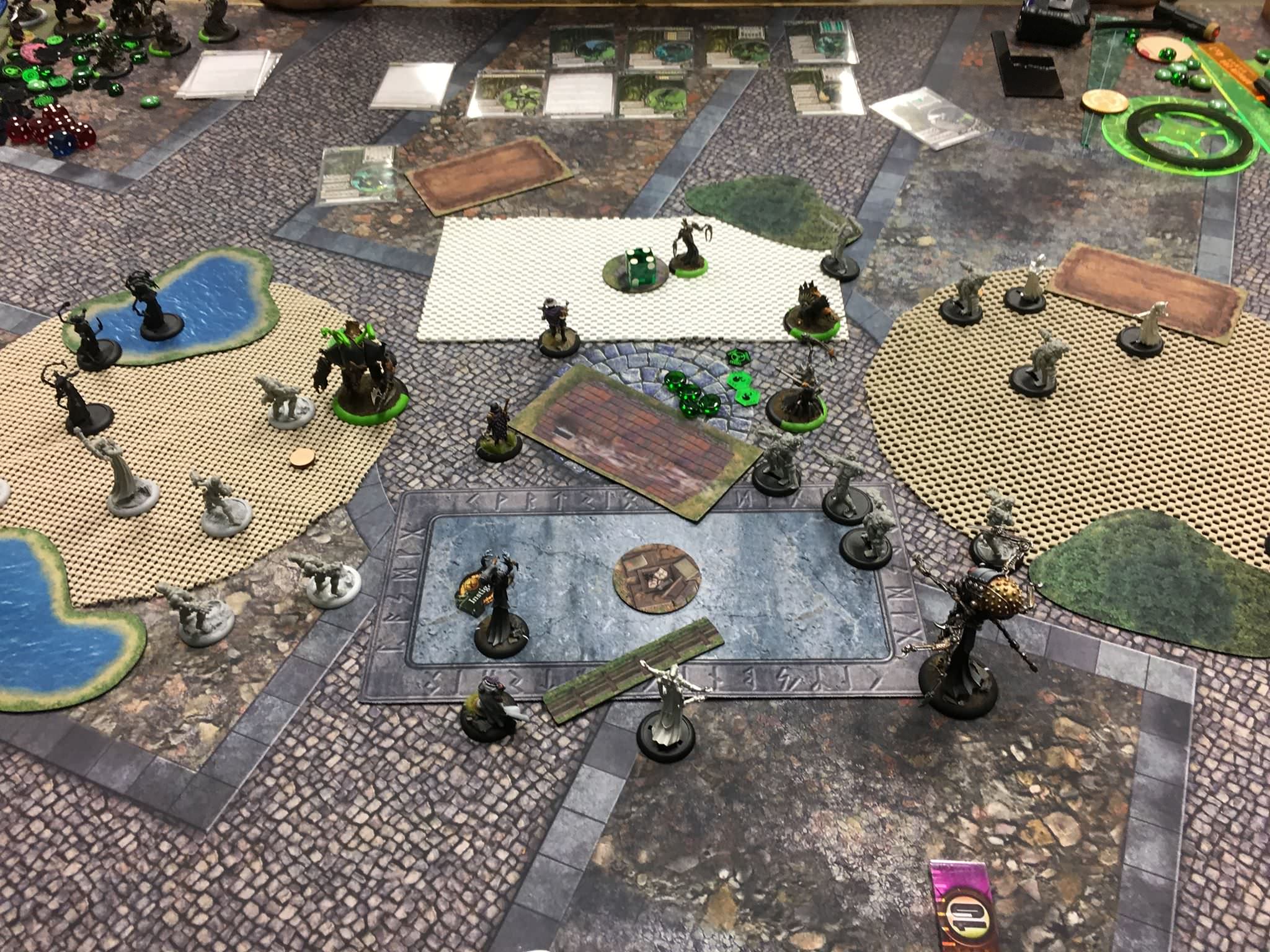 Round III – Spread the Net

My opponent was somewhat concerned from the word go in this one, as he selected Amon out of concern for the Harbinger’s safety against Ossrum, while I assumed that he likely wouldn’t be interested in playing her, and so brought Thexus, content to see what I could do in the matchup if I did end up seeing Harby. He went first and moved forward on top of one, but had to give me a friendly zone that would be pretty punishing to contest, because an obstruction allowed me to really remove a warjack at a time without providing easy angles for retaliatory trades.  He was concerned a second time on bottom of one, as he appreciated the issue that my machine wraiths presented for him (he could attack them well enough because of the Sanctifiers, but couldn’t easily do anything about them until they were committed, which would generally entail sacrificing something much more valuable for the opportunity).  On top of two he moved a Sanctifier into my friendly zone, enlivining it because it was better to do than not.  The vassal responsible set up camp on his flag, with an Indictor for company. Contesting my friendly flag with a heavy was a bridge too far at this point, however, and so on bottom of two I killed the Sanctifier and crippled the cortex and sword arm of the Indictor with the ambushing drudges, positioning the rest of the unit so as to not easily give up backstrikes to Stacy (it wouldn’t do for a Merc to get got by ambush) and killed the Vassal with an Overlord.  A Machine Wraith ran to my flag and so I ended the turn up 2-0.  He felt that things did not portend a long and successful scenario game at this point, and so got aggressive, feating with Amon and ending the turn on one focus and in his friendly zone, which he scored.  He dealt with the wraith my flag with a Dervish after getting the Sanctifier in range.  I don’t believe he contested my friendly zone, and so the turn ended 3-1.  on top of three I felt I had something of a free roll at Amon, as I could probably score both my friendly zone and his flag and make attritional inroads with the drudges and monstrosities on that die of the board, leaving the Bender unit, Overlords, and Holt without anything quite as essential to do with their activations.  One of the overlords managed to hit him and did 1-2 damage through his single focus, and Thexus set Holt up by TKing him into range to aim, and Holt obliged by hitting twice and doing what I think was very average damage.  The Bender unit then advanced one drudge into melee via an Adrenal Flood and the one attack proved enough to force a tough roll, which Amon failed, saving me from having to continue a longer game on attrition and scenario. 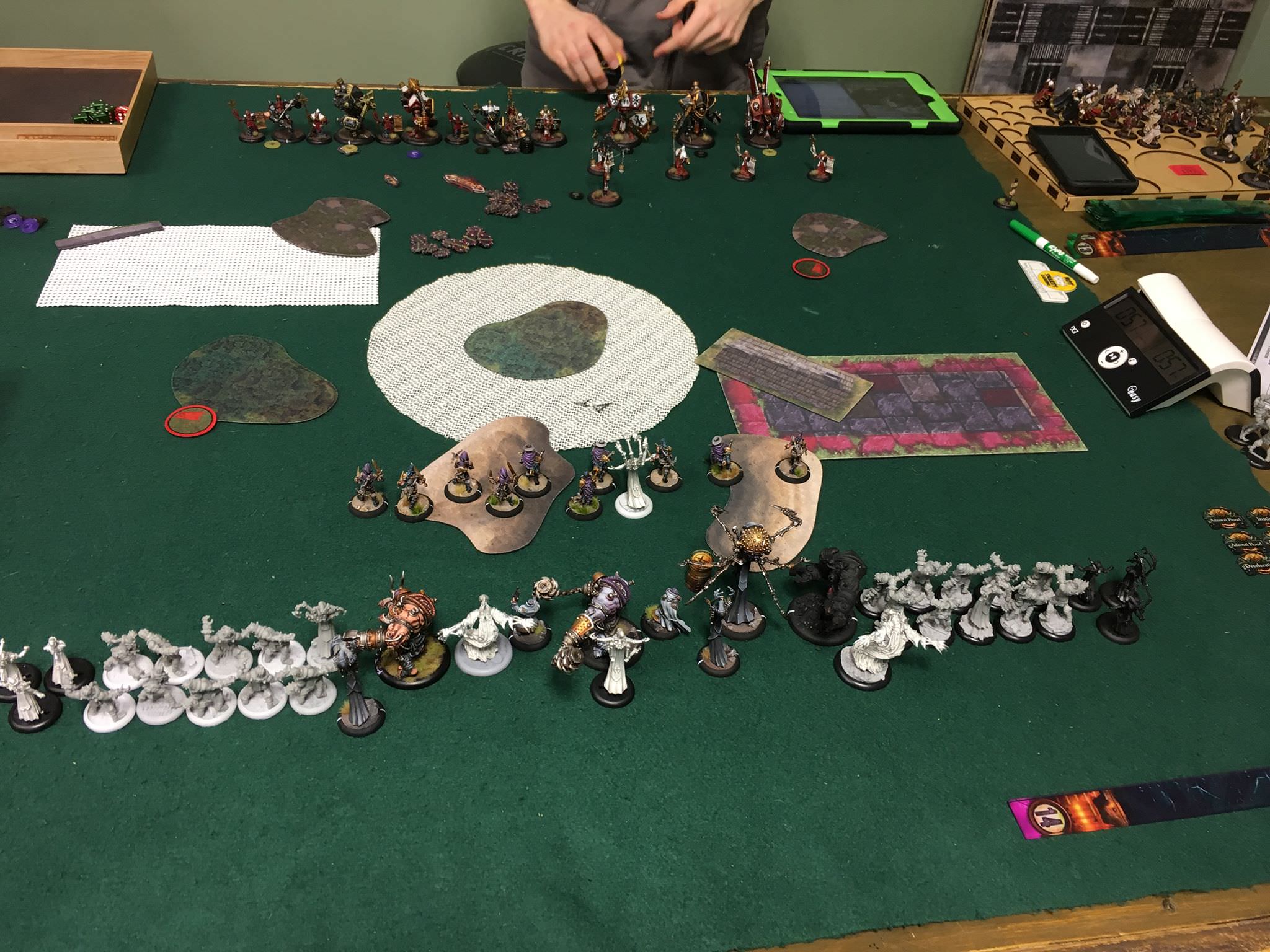 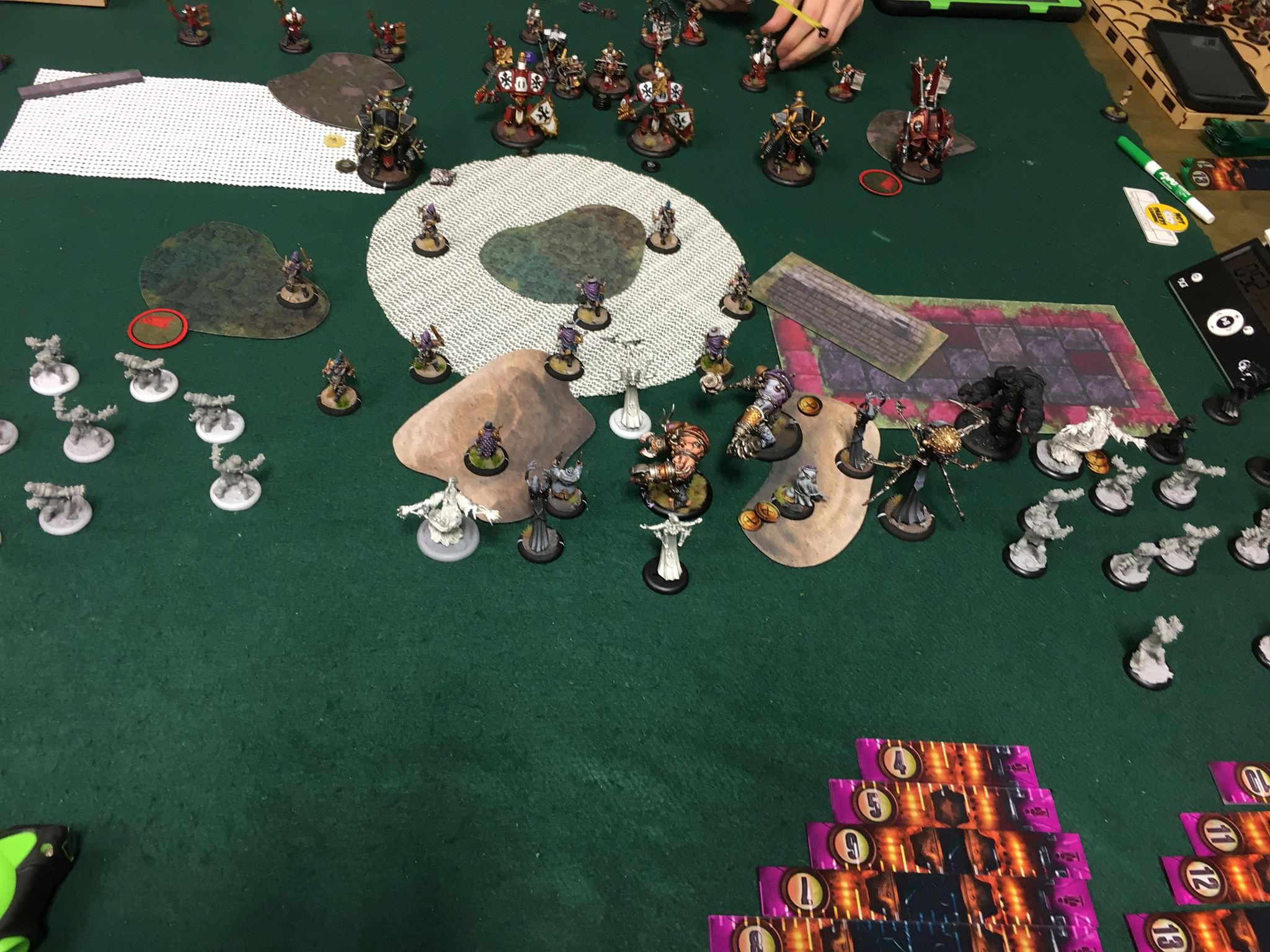 There were three undefeated after four rounds, and I ended up being the pair down.  Fortunately we all agreed that we weren’t about to play through 10:30 or 11:00 and that we’d just split in the event that I won and we didn’t have a clear winner at the end of the round.  That decision proved wise as both my opponent and I were tired in this one.  Early on I cemented in his mind the conclusion that he didn’t like his chances in a long game by very nearly killing his Bomber for free via a Rampager and the Aiyana/Croe unit activations (and I will add because I can’t stop myself that I should actually have killed it).  He ended up spending his turn two (bottom of two) tanking for a good thirty minutes trying to find a way to kill me, which I didn’t think he could, as Thexus was on a hill, camping 3, with a shield guard and both on the other side of a forest from Kolgrimma and Mulg and more than 21″ from the former and 19″ from the latter (and there weren’t really viable Hunter’s Mark targets around, the angle that would be created would require Mulg to turn to face away from Thexus to get up the table).  Happily for me my opponent eventually decided that I had done a good job of avoiding offering any sort of viable assassination and he conceded, having taken up most of his clock and also having not done anything significant to keep his shot at attrition alive.

The night was capped off by discovering that the game that I didn’t have to play would have been into Madrak I.  I could certainly stand to get more practice in that one, but in this particular case I was more than happy to let the opportunity escape me.

iThere are no comments

Friends of the Blog

Begin typing your search above and press return to search. Press Esc to cancel.